from carbon dioxide, the main culprit of greenhouse gas

of commercialization through cooperation with domestic oil refiners and contributing

to reducing national greenhouse gases in the future. 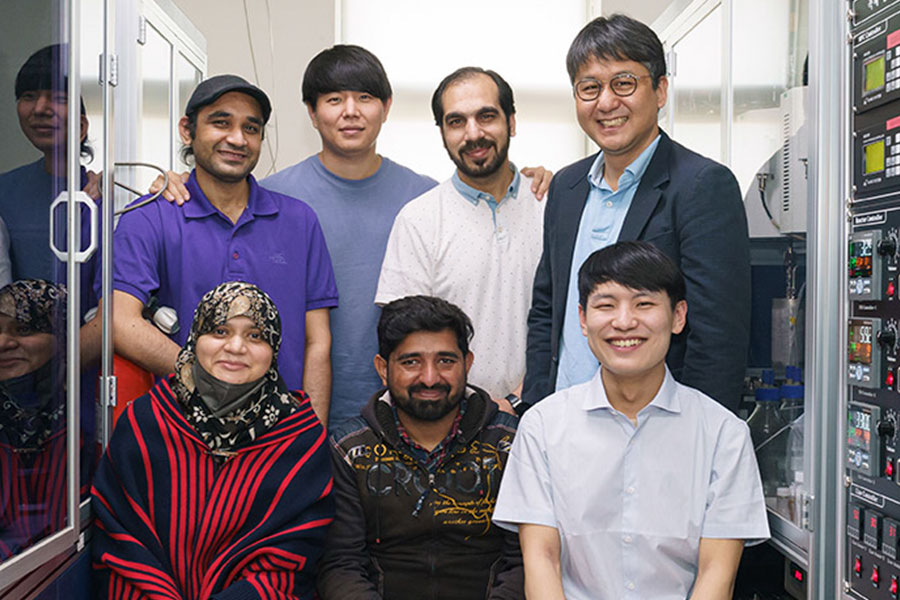 Due to the industrial revolution using coal in the mid-18th century and the discovery of crude oil in the 19th century, humankind has made rapid progress by developing technologies to mass-produce cheap fuels and chemicals. Korea also ranks 5th in the world for its heavy chemical industry development strategy in the 1970s and has the 8th largest oil refining industry in the world.In the 20th century, rapid economic development was achieve globally through the use of fossil fuels such as crude oil and coal, but as a reward, the concentration of CO2 in the atmosphere increased day by day and reached 420 ppm. It has reached a stage that threatens the survival of humankind, such as global warming, ecosystem destruction, sea-level rise and seawater acidification.

ProfessorJae-Hoon Kim's research team (Department of Mechanical Engineering) at Sungkyunkwan University has developed a technology that can selectively produce fuels and value-added chemicals by reacting carbon dioxide emitted from industry with renewable hydrogen. The research is expected to contribute to mitigating climate change.

The research team developed a technology for synthesizing C5+ long-chain hydrocarbons that can be used as fuel for gasoline and diesel with high selectivity of 77.0% from CO2 using an iron-based catalyst (Na-FeAlOx) with an alumina promoter. The results were published in ACS Catalysis at 2020 [ACS Catalysis, 2020, 10, 10325−10338]. Through this study, the research team identified the principle of the synthesis mechanism of alpha-olefin, a precursor of aromatic compounds, in iron-based catalysts.

[Reaction mechanism of CO2 in the Na-FeAlOx catalyst]

The research team confirmed that it was possible to produce aromatic compounds from carbon dioxide with a high CO2 conversion rate of 45% and a high aromatic selectivity of 39% by using a composite catalyst combining iron-based catalyst and zeolite. The results were published in Applied Catalysis B:Environmental at 2022 [Applied Catalysis B: Environmental, 2022, 301, 120813]. In particular, the selectivity of BTX among aromatic compounds was high at 59% by controlling the acid site of zeolite. The highly value-added aromatic compound refers to benzene, toluene, xylene, etc. These essential chemical materials rank first in total petro chemical production.

In addition, the research team developed the world's first process that can operate for over 1425 hours with a high yield of about 20% of  C5+ long-chain hydrocarbons from CO2 using a cobalt-based catalyst. The results were published in Applied Catalysis B: Environmental at 2022 [AppliedCatalysis B: Environmental, 2022, 305, 121041]. Furthermore, the cobalt-based catalyst newly developed by the research team laid the foundation for the production of promising liquid fuels and lube base oils because the catalysts exhibit high C5+ and C21+ selectivity in the conversion of CO2. In addition, the research team designed a nickel-zinc alloy catalyst capable of synthesizing high value-added chemical materials such as acetic acid and propionic acid by direct hydrogenation of CO2, and published the results in ACS Catalysis at 2021 [ACS Catalysis, 2021, 11,8382–8398]. 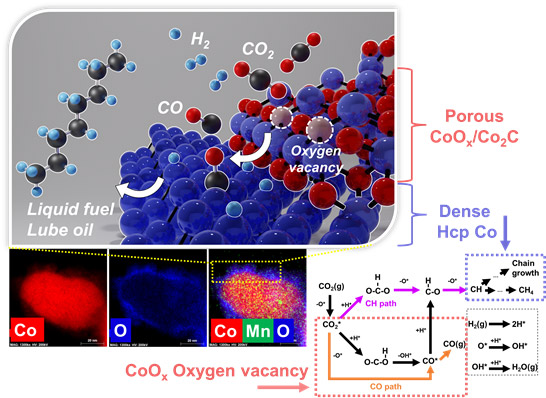 Currently,Professor Jae-Hoon Kim's research team is researching the possibility ofcommercialization in collaboration with a domestic oil refinery. It intends tocontribute to reducing national greenhouse gases in the future.